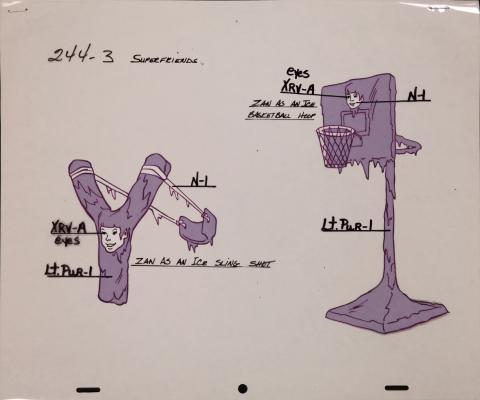 This is an original hand-painted model cel from the Hanna Barbera animated series, Super Friends. The cel features Zan from the Wonder Twins and was created and used during the production of an episode from the 1980s iteration of the show. Model cels are created during production in the same manner as screen shot production cels, but are used for reference by the animators and ink and paint deparment to ensure consistent character design and color usage for characters in a production. Zan's power was the ability to transform into a form of water, as seen in these hilarious images. The untrimmed cel measures 10.5" x 12.5" and the images measure about 7" x 10" overall.

This piece was exhibited at the Norman Rockwell Museum in Stockbridge, MA for their 2017 exhibit, "Hanna Barbera: The Architects of Saturday Morning."