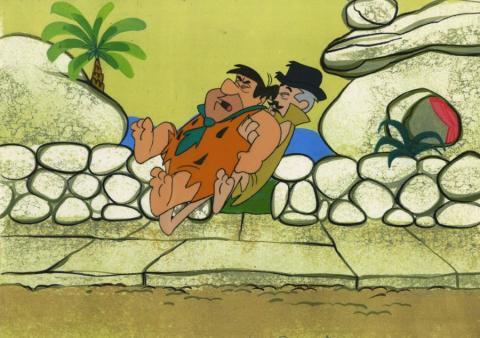 An original production cel from the Hanna Barbera Studios animated film The Man Called Flintstone (1966). Featuring an image of Fred being pulled back by the film's disguised villain Triple X, the hand-painted cel was created at the studio and used during the animation process. The piece is an actual frame of animation that was photographed and appears in the cartoon. Measuring 9.5"x13" overall, with the character image measuring 4.5"x5.5", the trimmed cel is in very good condition with light edge wear, some surface scuffing and minimal rippling throughout. The piece has been paired with a color copy reproduction background.