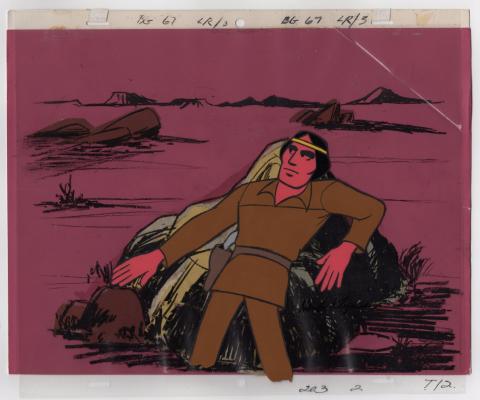 An original production cel and background setup from the Format Studios animated series The Lone Ranger (1966-1968). Featuring Tonto, the setup's pieces were created at the studio and used during the animation process. The character is hand-painted on a cel layer that is paired with an original production background, and it has been hand-signed by producer Herb Klynn. Backgrounds from the series are very unique, using collaged layers of cut and torn paper with grease pencil on cel overlays to create a striking effect. Measuring 10.5"x12.5" overall, and with the main image area measuring 10.5"x11.75", the setup is in very good condition with minor edge wear and a creased upper right corner to the character's cel layer.