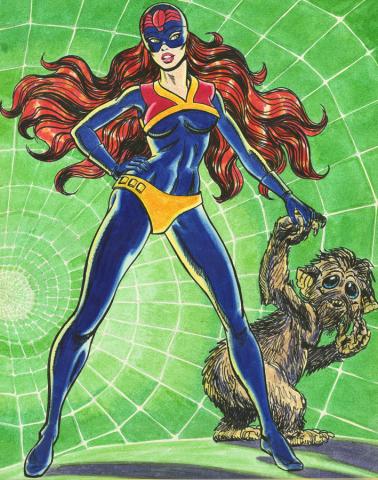 This is an original concept design used as pitch art by Filmation Studios in 1978 to develop a new series. Originally, the studio was looking to develop an animated version of Marvel Comics' character Spider Woman. After Marvel found out about this project, they quickly rushed out their own shortly lived Spider Woman series in order to retain the copyright on the character. With Marvel creating their own series, Filmation was forced to drastically change their character, and Web Woman was born. This concept was likely prior to Marvel's series, as the design is a more direct attempt at a spider woman, and is drastically different from the final character design for Web Woman. This wonderful piece is large, measuring 20" x 16" overall and is in fantastic condition with the bold imagery taking up the entirety of the board, barring a small boarder of tape masking the edges of the board.