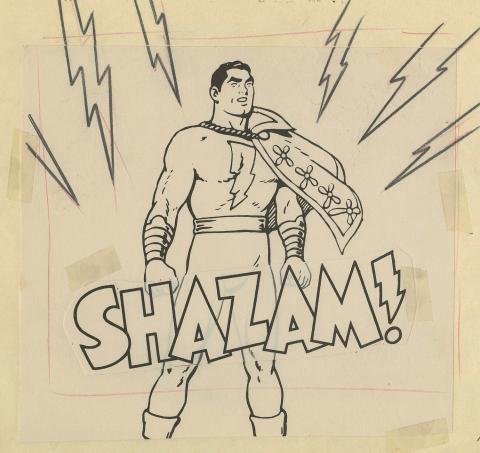 This is an original layout drawing from the Filmation Studios series, Shazam! This drawing features the main character, Captain Marvel, and was created at the studio and used during the production of the opening titles of the series. The overall drawing measures 10.5" x 12.5" and the image area measures 9" x 9". The piece is partial xerox, the logo and majority of the character image is xerox, with hand embelishments for the lightning bolts and areas were the charcter and logo image intersect. The main image area, is also drawn on a separate sheet of paper that was trimmed and applied to the main sheet. The color image shown is a refrence image of the shot in the opening titles that this piece would have been used to create, it is not a physical print or piece included with the drawing.