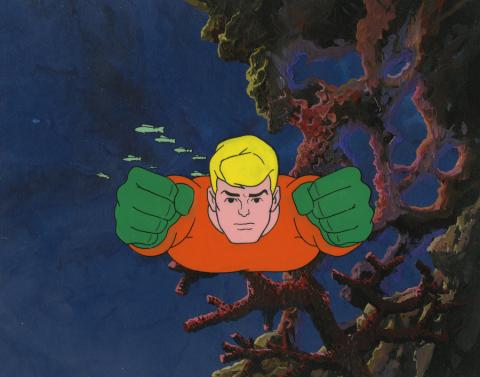 This is an original production cel from the Filmation Studios production of The Superman/Aquaman Hour of Adventure (1967-1968). This cel features Aquaman and was created at the studio and used during the production of an episdoe in the series. The cel is paired with a hand-painted production background from the Filmation Studios animated serires, Fantastic Voyage, which looks fantastic with the image of Aquaman. The overall measurements of the set-up are 10.5" x14" and the image itself measures 10" x 12.5". The set-up is in very good condition with a small amount of residual paint stuck to the surface of the cel.