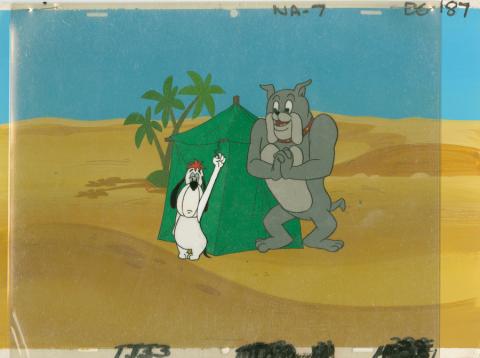 This is an original production cel from the Filmation Studios production of a Droopy dog segment of Tom and Jerry (1980-1982). This hand-painted cel features a fantastic image of Droopy and Spike with a tent, and was created at the studio and used during the production of the series. The cel is paired with a hand-painted production background from Filmation studios, but I'm not sure of the production it was used in. The overall measurements of the piece are 10.5" x 14" and the image itself measures 5.75" x 6.5". The cel is in excellent condition and is attached to the background with two staples, as prepared by the studio.