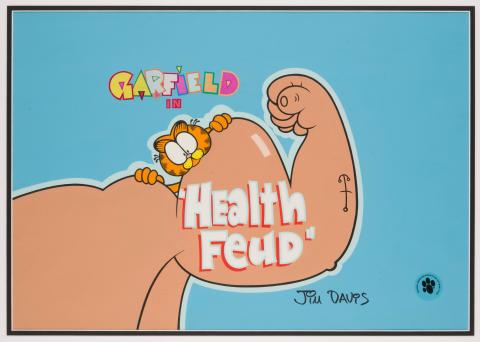 An original title card from the Film Roman Studios animated series Garfield and Friends. Featuring Garfield climbing over a mountainous muscular bicep, the title card was created at the studio and used during the animation of the episode Health Feud (1989). The piece is an actual frame of animation that was photographed and appears at the beginning of the cartoon. Measuring 24"x30" framed with the mat opening measuring 14"x20", and with the character image measuring 12"x15", the title card is in fine condition, unexamined out of frame. Due to the still frame nature of many title cels, the artwork is not usually as large as this piece.