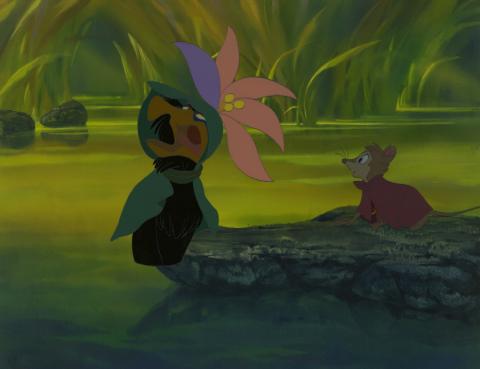 An original preliminary background and production cel setup from the Don Bluth Studios animated film The Secret of NIMH (1982). Featuring Jeremy and Mrs. Brisby talking on a rock in the water, the hand-painted cel was created at the studio and used during the animation process. The cel has been paired with a hand-painted preliminary background from a different scene in the film, but both pieces are from the same sequence. Don Bluth was notorious for his attention to detail and would often change the layout, look, or color pallette in a scene after seeing dailys. The background measures 13.5"x16.5", the cel measures 10.5"x12.5", and the character image measures 8"x12.5". The setup is in fine condition.