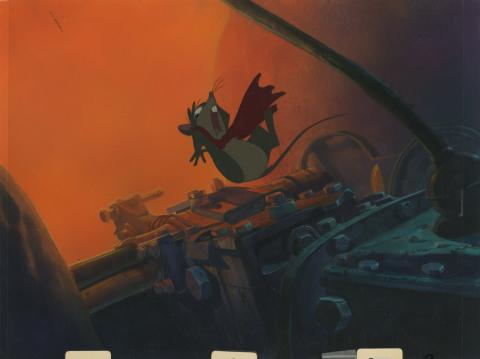 An original production cel and background setup from the Don Bluth Studios animated film The Secret of NIMH (1982). Featuring Mrs. Brisby looking shocked, the hand-painted cel was created at the studio and used during the animation process. The cel is paired with a hand-painted production background of the tractor's engine. Each piece is an actual frame of animation that was photographed for different scenes, and they appear separately in the movie. The background measure 10.5"x13.5", the cel measures 10.5"x12.5", and the character image measures 3"x4.5". The setup is in fine condition with minor edge wear to the background from studio use and handling.