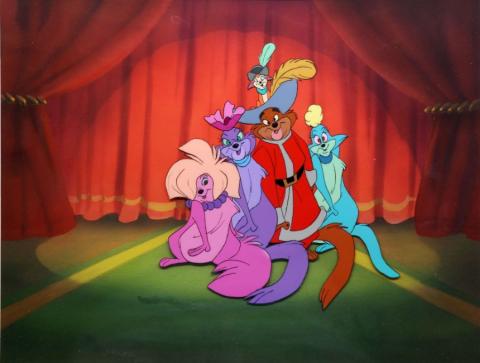 An original production cel and background setup from the Don Bluth Studios animated film Banjo the Woodpile Cat (1979). Featuring Banjo and Crazy Legs singing a musical number with the cat sisters, the hand-painted setup was created at the studio and used during the animation process. The piece is an actual frame of animation that was photographed and appears in the cartoon. Measuring 16"x18.75" framed with a mat opening of 9"x12", and with the character image measuring 7"x6.5", the setup is in very good condition. Also included is a cel of the drum on a stand that is key to the scene, but is held separate rather than being obscured by the characters.