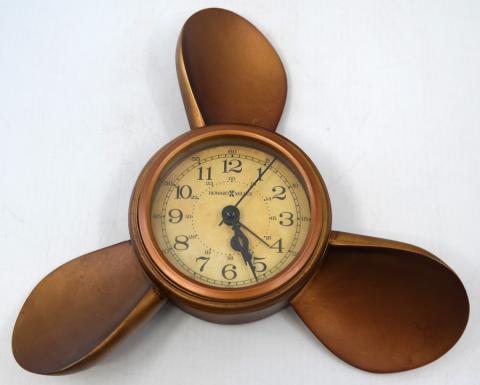 A rare Disney Cruise Line propeller shaped alarm clock by Howard Miller. Clocks like this were found in the cabins of the Disney Magic and Disney Wonder cruise ships. The clock is fashioned as a replica of the propellers of DCL ships, and is finished in an antique copper color. The three blade propeller is the style of clock that was released for the first wave of clocks sold on the ships with later versions exhibiting more blades and a DCL logo on the clock face. Measuring 8"x8.75" and 2” thick, the clock is in good condition with minor wear from age and scratches in the paint. Requires one AA battery.