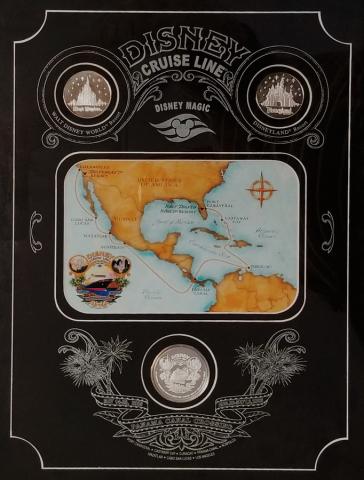 A framed set of medallions commemorating the Disney Magic's first crossings of the Panama Canal. Prior to 2005, the Magic operating strictly in the Bahamas, but in 2005 was moved over to California to test the market for the West Coast Port. In 2007, the Magic began Mediterranean cruise itineraries, making this 2005 crossing a very special event. The medallions depict the departure and destination locations of Watl Disney World and Disneyland as well as the special Panama crossing dates for that year and are displayed within a beautifully designed etched glass display. Measuring 17.75"x13.75" framed with three medallions measuring1.5" in diameter, the souvenir is in good condition with some scratching seen in the frame's modling.