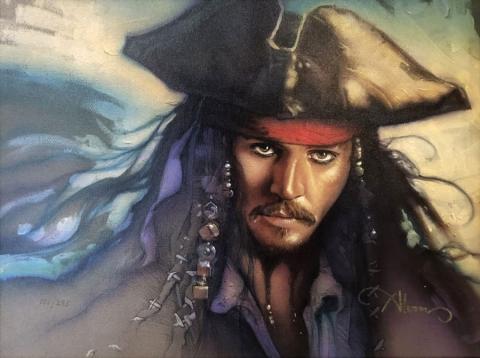 A limited edition giclee print featuring a portrait of Captain Jack Sparrow smoldering from the Walt Disney Studios feature film Pirates of the Caribbean (2003). The print was created by artist John Alvin in 2006, and is number 101 from an edition of 295. Alvin's artistry is seen in many of the memorable promotional posters created for feature films, and Johnny Depp's iconic character is brought to life with Alvin's masterful style. Measuring 21.5"x26.5" framed, with a mat opening of 14.5"x19.5", the giclee is in fine condition and has been signed by the artist and hand numbered.