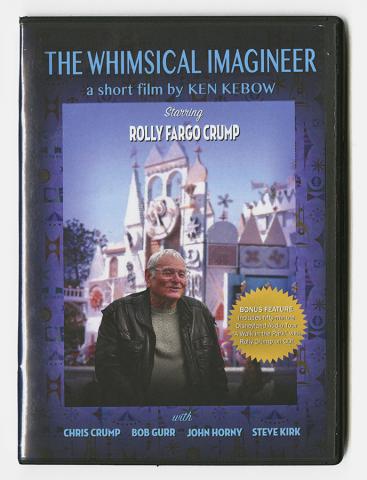 This is a 30 minute long DVD documentary filmed and released by Ken Kebow in 2017.

When Rolly Crump interviewed for a job at Disney Animation back in the 1950s, he was told he had "the worst portfolio of anyone ever hired at Disney Animation Studio."
As it turned out, Rolly was one of the best hires Disney ever made! Working with Walt Disney himself, as well as the original group of Disney Imagineers, Rolly went on to create some of Disneyland's most beloved attractions including "the Haunted Mansion," "the Enchanted Tiki Room," and "It's a Small World."
Join Rolly himself, as well as Disney legend Bob Gurr, Rolly's son and Imagineer Chris Crump and a number of others who worked with Rolly over the years in "The Whimsical Imagineer," a half-hour documentary highlighting Rolly's work at Disney.
The recipient of numerous awards and accolades, "The Whimsical Imagineer" takes viewers on an informative and entertaining journey with Rolly on working side by side with Walt and helping to create "the happiest place on earth!"

Bonus Features include additional Rolly interview clips, a behind the scenes montage, and images of Rolly's artwork. Also included is a 50 minute Disneyland audio tour, "A Walk in the Park" with Rolly Crump.