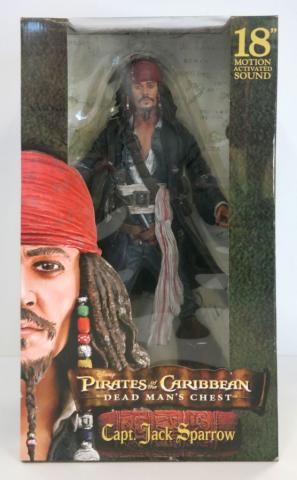 A posable figure inspired by Pirates of the Caribbean: Dead Man’s Chest. Featuring Johnny Depp's Captain Jack Sparrow, the 18" figure comes with accessories including: a rum bottle, Jack’s hat, a pistol, a cutlass and an optional extra hand to give some variety to Jack’s pose. The doll has a motion-activated sound mechanism that has not been tested. Jack was produced in 2006 for the film's theatrical release and is in very good condition with the original box, which is also in very good condition with minimal surface wear from storage.