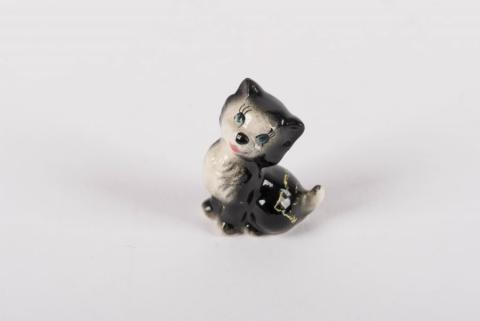 A ceramic figurine inspired by the 1940 Disney Studios film Pinocchio. Featuring a miniature depiction of Geppetto's cat Figaro, the ceramic figurine was create by Shaw Pottery in the 1940's. The adorable facial expression is captured in stunning detail for such a small figure, a common characteristic of Shaw ceramics. Measuring 1”x0.5” and 1.25” tall, the figure and is in very good condition with some adhesive residue near the tail. Through the 1940s and 1950s, the Evan K. Shaw Pottery company and its sister companies, Metlox and American Pottery, produced a wide range of ceramics. In 1943, they were granted approval as a licensee to produce a range of Disney characters. These companies are no longer in business, and their highly desirable figurines are increasingly rare.