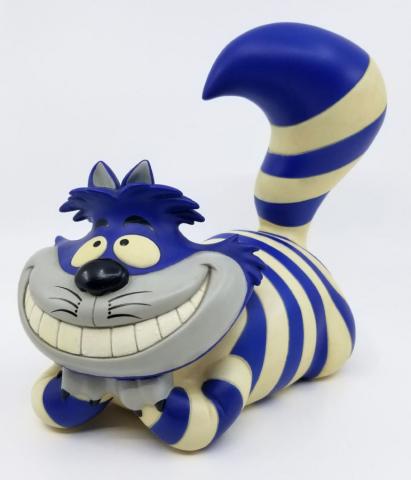 A vinyl figure inspired by the Cheshire Cat character from Disney's Alice in Wonderland. The "Opening Day Mannymania" variant of Span of Sunset's Cheshire Cat vinyl series was released in a limited run in 2009. The 7" tall vinyl figure was sculpted by Monster5 and painted with glow-in-the-dark eyes and teeth, as well as blue and white stripes to honor the Los Angeles Dodgers. The figure's box has a matching color pattern and is designed to recreate the Cheshire Cat's face, revealing the eyes when partially opened. The figure was previously on display and is in good condition overall with some minor wear to the paint that is mostly apparent on the underside of the cat, and wear to the box and its hinge.