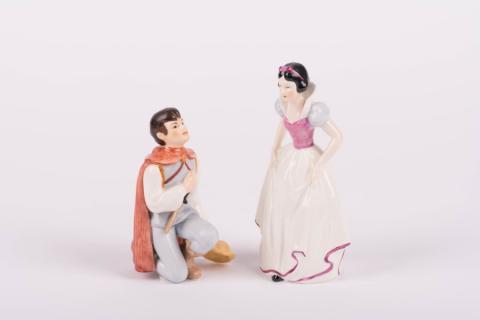 A pair of ceramic figurines inspired by the 1937 Disney Studios film Snow White and the Seven Dwarfs. Featuring Snow White and The Prince, the Hummel figurines were produced by Goebel. Snow White's mold was originally produced by Goebel in the 1950's, but the prince was not added to the manufacturer's line up until the late 1970s. Snow White measures 2.75”x2”x5.5” tall, and The Prince measures 2.5”x2.75”x4.25” tall. They are both in very good condition with minor imperfections in the glaze.