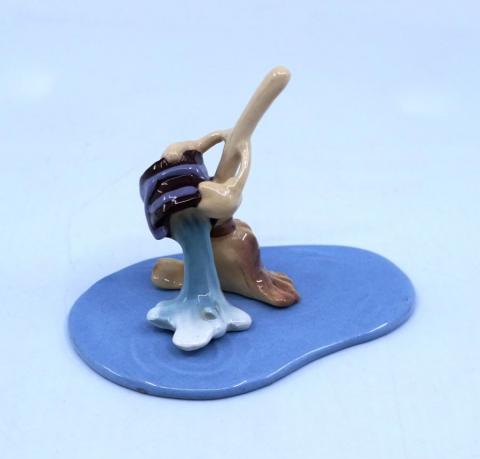 A vintage ceramic figurine of an enchanted broom from the Sorcerer’s Apprentice segment of Walt Disney’s Fantasia. The figurine was created by Hagen Renaker in conjunction with the 1982 re-release of the film. This version of the figure shows the broom without gloves, where another version of the figurine is wearing white gloves. Only 624 total pieces from the 6 figure set were produced and sold at Disneyland and Walt Disney World. The broom figurine measures 1.75”x1.75” and 2.75” tall and is in very good condition with minor production inconsistencies in the paint and glaze. Included with the figurine is a Hagen Renaker base that was created for an unrelated figurine.