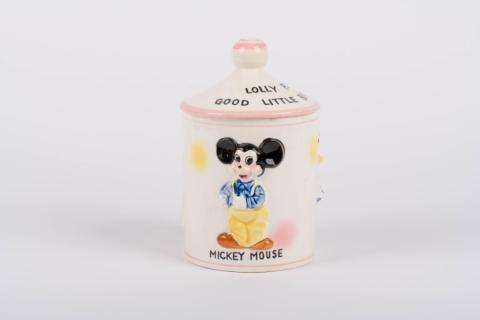 A ceramic candy jar produced by Dan Brechner in 1961. Featuring Ludwig Von Drake, Donald Duck, and Mickey Mouse, the lid reads “Lolly Pops for Good Little Boys and Girls” and has pink trim around the handle and rim of the lid. The stamp on the underside of the jar reads “1961 Walt Disney Productions.” Measuring approximately 5” in diameter and 7.75” tall, the canister is in very good condition with some minor wear and crazing throughout.