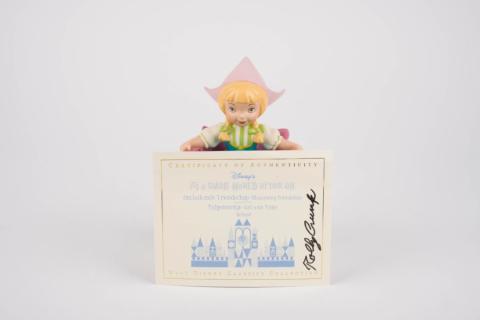 A Walt Disney Classic Collection Holland figurine themed for the It's a Small World Attraction from the Disney Parks. The figurine is titled Ontluikende Vriendschap (Blossoming Friendship)/Tulpenmeisje (Girl with Tulip) and was released in 2006 for the 40th anniversary of the attraction's addition to the Disneyland theme park. The COA for this delicate piece was hand-signed by legendary imagineer Rolly Crump, who helped to design the 1966 attraction. The figurine features a child sitting inside of a large tulip, the national flower of Holland. Measuring 4"x3.5" and 6.5" tall, the figurine is in very fine condition with its original box, packaging, and COA.