Hyperion Ship Brownline Plans for "The Island at the Top of the World" - ID: sepdisneyana21052 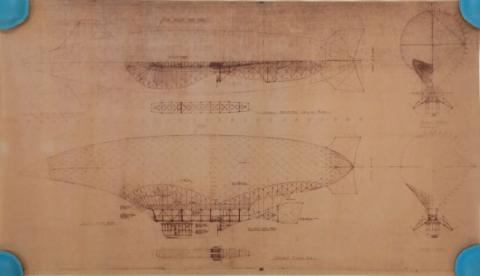 A brown line plan of the Hyperion Airship from the Walt Disney Studio movie "The Island at the Top of the World." Featuring a depiction of the airship that serves as the exterior facade for Cafe Hyperion, the plans were likely used in the late 1980s and early 1990s planning of the Videopolis Theatre cafe in Disneyland Paris' Discoverland. It is possible these plans were inspiration for the proposed 1970s "Discovery Bay" attraction at Disneyland, but we believe them to be more recent. Due to the film's lackluster reception, the Disneyland project was canceled during development. Measuring 24"x41.5", the brown line is in very good condition with edge wear, curled edges, and light creasing from being stored rolled.