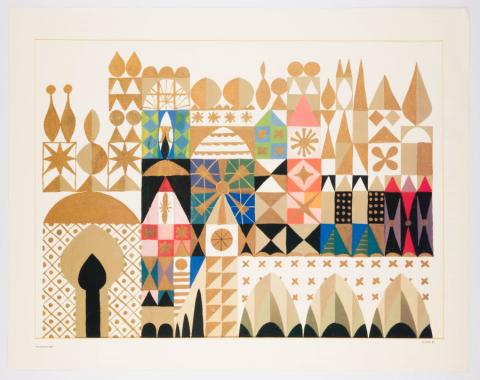 A lithographic print of the It's a Small World facade from the Disneyland Hotel. Featuring one of the fanciful 1964 concept images of It's A Small World's famous facade, the design was originally hand painted by celebrated Disney artist and Imagineer Mary Blair. It's A Small World opened in 1966 with a look that is wholly inspired by the look of Mary Blair's artistic style. The print was produced in the 2000s as room decor in the Disneyland Hotel, showcasing the inspiration design. Measuring 22"x28" overall with an image size of 18"x24.75", the print is in fine condition with a minor crease in top right corner. Ships rolled.