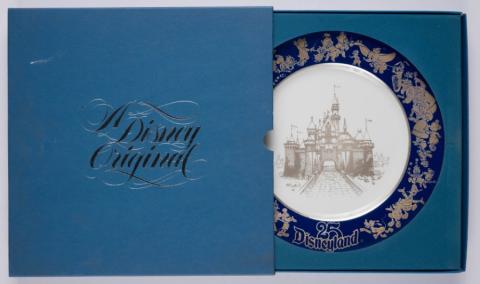 A commemorative Disneyland 25th anniversary plate. Featuring Sleeping Beauty Castle in metallic print in the center of the plate and many beloved Disney characters celebrating along the blue and metallic rim of the plate. Disneyland celebrated its 25th anniversary in 1980 with a television special hosted by Danny Kaye, which featured many celebrity appearances and a performance by Michael Jackson. Measuring 12.5" in diameter, the plate is in good condition with some tarnished aging to metallic imagery and a split edge on the outer packaging.