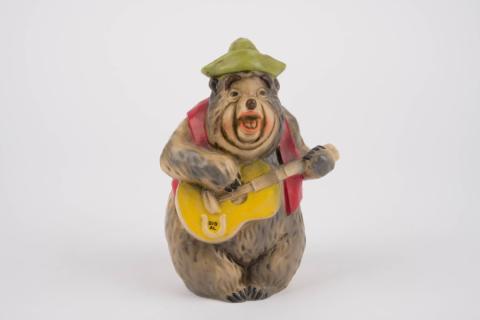 A souvenir ceramic coin bank from Disneyland. Featuring Big Al the bear, a character originally designed by Disney artist Marc Davis, the bank was sold in the park in the 1970s. Big Al was featured in the now defunct attraction Country Bear Jamboree in Critter Country. The lovable bear is depicted in his usual green hat and red vest with his trusty yellow guitar in hand. Measuring 4.5"x3.5" and 7" tall, Big Al is in very good condition with a small spot of discoloration on his nose and paint wear on his hat brim.