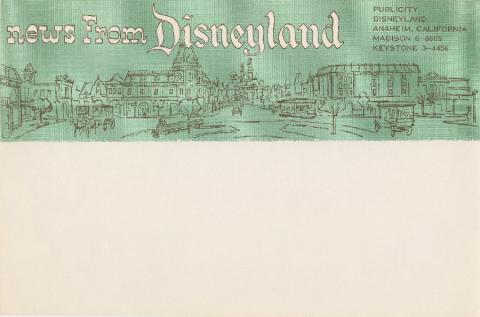 This is a pair of original trimmed sheets of studio stationery from Disneyland. Disney's animation studio and WED department would create new stationery while they were working on new films or theme park projects, and these sheets are standard stationery used by the Disneyland's offices in the 1960s. This stationery would be used by the office when sending correspondence to promote the park. Both pieces have been trimmed to half-sheet size, retaining only the top half of the sheet which has the letterhead. The overall measurements of the trimmed pieces of stationery are 5.5" x 8.5". and are in very condition.