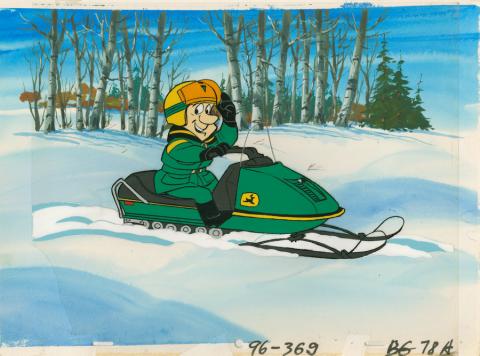 This is an original production cel and background from an animated safety video for John Deere's Snowmobiles from the 1980s called Safety Savvy, created by Hanna Barbera Studios. The cel features a man on his John Deere Cyclone snowmobile. It was created at the studio and used during production, representing an actual frame of animation that was photographed and appears in the advertisement. The cel is paired with a production background from the same film. The overall measurements of the piece are 10.5" x 12.5" and the image itself measures 5" x 12". The setup is in very good condition with a torn left bottom corner, and a few other small tears along the bottom edge.