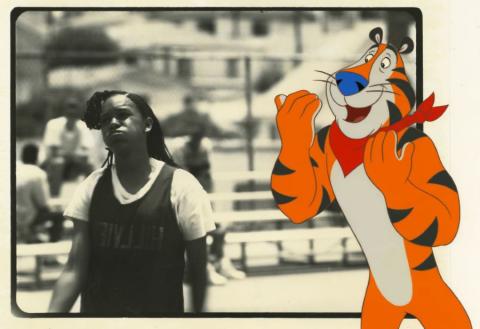 An original production cel from an animated commercial for Frosted Flakes Cereal. Featuring Tony the Tiger encouraging a young basketball player, the hand-painted cel was created at Duck Soup Studios in the 1990s and used during the animation process. The piece is an actual frame of animation that was photographed and appears in the final advertisement. Measuring 13.5"x16.5" overall with an image that measures 9.5"x6", cel is in fine condition with a light curl to the bottom left corner. Also included is the original reference photo used during production.