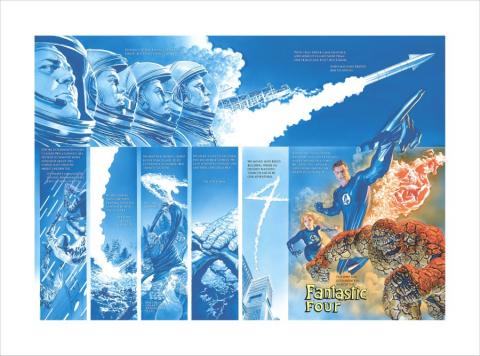 Only AP & PP editions are currently available. Origins: Fantastic Four is a limited edition print created as a dramatic illustration by Alex Ross for a new book featuring the fab four heroes, Fantastic Four Full Circle. Featuring the iconic Marvel superhero team, the print was released for the San Diego Comic Con in 2022. Measuring 27"x37", the digital print on paper was produced exclusively for Alex Ross Art at Comic Con in a limited standard edition of only 100 pieces and is hand-signed by Alex Ross. Ross’s image takes us on a visual journey through the beginnings of Marvel’s Fantastic Four: Sue Storm - Invisible Woman, Reed Richards - Mister Fantastic, Ben Grimm - the Thing, and Johnny Storm – the Human Torch. When a mission to space goes awry the four gain superpowers after being exposed to cosmic rays. Reed, the leader and a scientific genius, gains the ability to stretch into a multitude of shapes; Sue Storm Richards, who becomes the wife of Reed, has the gift of invisibility and can produce powerful force fields and blast; Johnny Storm, Sue’s younger brother, can fly and produces flames; Grimm, an excellent pilot, a former college football star and roommate of Reed’s, can morph into an enormous stone creature with superhuman strength, endurance, and durability. The print was created as part of ongoing Alex Ross Origins images and is shipped rolled and unframed.

This print comes directly from the publisher and is ordered at the time of purchase. Please allow 3-4 weeks for delivery within the United States. Please contact us with any questions regarding delivery or availability.