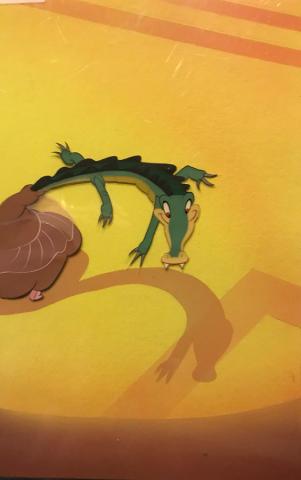 This is an original production cel from the Walt Disney Studios production Fantasia (1940). This hand-painted cel features Hyacinth Hippo and Ben Ali Gator as they dance together. It was created at the studio and used during production, representing an actual frame of animation that was photographed and appears in the cartoon. The cel is paired with a color copy background. The the image measures 6" x 9" and the cel has been trimmed to the actual image, only a portion of Hyacinth is seen in this cel, as shown in the image. The production cel is in very good condition.