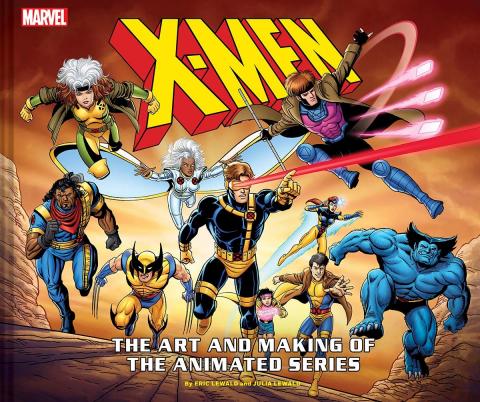 WE ARE CURRENTLY OUT OF STOCK ON THIS ITEM

This book is being offered with a custom book plate that will be signed by the authors.

All orders of this book will also include a free production cel from X-Men: The Animated Series!*

The story behind the creation of one of the most celebrated, revolutionary animated series of all time

X-Men: The Art and Making of the Animated Series takes fans behind the scenes of the landmark cartoon that laid the groundwork for the dozens of Marvel Comics adaptations that followed. Interviews with series writers, artists, producers, and executives reveal the razor’s edge that Marvel and Fox navigated in order to bring the X-Men to television, and detail the tough decisions, compromises, and brilliant solutions that resulted in a series that has been lauded by critics and fans for nearly three decades.

This book gives a ﬁrsthand account of what it’s like to develop, pitch, design, write, draw, direct, and produce a hit animated series, and is jam-packed with never-before-seen concept sketches, storyboards, character models, background layouts, cels, and production and promotional materials.
PRAISE
“…many a comic fan considers the 1990s X-Men animated series to be the definitive screen version of Marvel’s iconic mutant team — and this encyclopedic new volume is the definitive guide.”— Yahoo! Entertainment
“Plain and simple, this is a must-buy for all X-Men fans.”— Geeks Worldwide
“It’s a must read for all fans of the 90s cartoon classic…”— The Beat
“…you’re truly getting a look behind the curtain to how [the show] came together.”— Cinelinx
“Abrams Books has published something that satisfies those looking for animation knowledge, art aficionados, and the most die-hard critical X-Men collectors.”— Red Carpet Report
“…a behind-the-scenes look packed with commentary and never-before-seen concept art, storyboards and more.”— The Los Angeles Times

ABOUT THE AUTHORS
Eric Lewald is one of the premier writer-producers in animated television and has been the showrunner on 13 series. He is married to Julia Lewald.
Julia Lewald is an award-winning writer and showrunner who crafted scripts for X-Men: The Animated Series as well as for such hits as Chip ‘n’ Dale’s Rescue Rangers, Darkwing Duck, and Transformers: Robots in Disguise. She is married to Eric Lewald.

*Free X-Men cel is valued at $30-$50 USD retail value and is chosen at random. All cels will be of a character from the X-Men, and not an incidental background character.