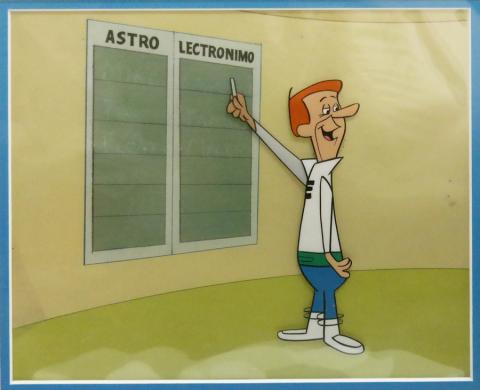 This is an key set-up from the Hanna Barbera Studios production The Jetsons (1962). This cel is from the fifth episode in Season One called "The Coming of Astro" which premiered in 1962. The cel features George Jetson. It was created at the studio and used during production, representing an actual frame of animation that was photographed and appears in the cartoon. The overall measurements of the piece are 15" x 16.5" framed with the mat opening measuring 8" x 9.75". The image itself measures 8" x 9.75". This piece is in very good condition with some wear to the frame. The art has not been examined out of the frame.