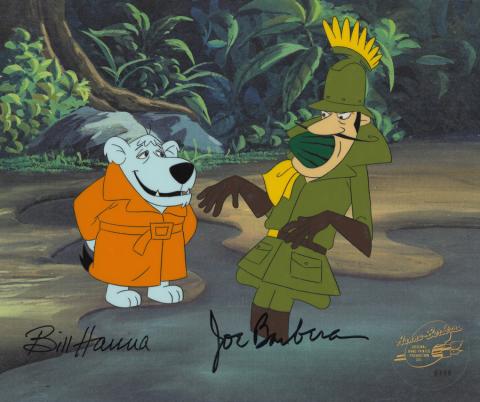 An original production cel from the Hanna Barbera Studios animated film Yogi Bear and the Magical Flight of the Spruce Goose (1987). Featuring Dastardly and Muttley look-a-likes the Dread Baron and Mumbly, the hand-painted cel was created at the studio and used during the animation of the film. The piece represents an actual frame of animation that was photographed and appears in the cartoon, and it is accompanied by a studio prepared reproduction background. The cel has been hand-signed by legendary animators and studio heads Bill Hanna and Joe Barbera. Measuring 10.25"x13" overall, and with an image measuring 7.25"x7", the production cel is in very good condition. The artwork comes from the official WB Studio art program, and a studio COA will be provided.